The protagonist was a normal high school student when her ability awoke and went on a rampage.

Alienated by the power, the protagonist was forced to drop out when a letter of recommendation arrived, written by the principal of Super Ashinaka Academy; Miwa Ichigen. This enabled her to transfer to the school as an exception.

The protagonist’s heart was full of excitement when she was shown around by her kind classmate, Yukizome Kukuri, when she suddenly got dragged into the dispute between club activities.

The dispute was between two of the seven extraordinary clubs that are specialized in recruiting people with unique abilities;

For some strange reason, both club presidents’ eyes were fixed on the protagonist/each other and the protagonist was rescued by three members of the Silver Club: President Isana Yashiro, and members Yatogami Kuroh and Neko.

Surrounded by characters with overflowing personalities, the curtain of the protagonist’s new school life will now open! [3]

Konohana Saya recently transferred to the Island School, when she sees the Blue and Red club fight. A stray attack almost hits Kukuri, and not hesitating to save her new friend, Saya finds out she is a Strain, catching the attention of the Red King Mikoto, the Blue King, Munakata and the Silver club with Yashiro.

The game play of Gakuen K ~Wonderful School Days~ is like other otome games; the player must choose a partner and proceed through the scenarios until one of the partner's ending comes up.

In this game, the player must choose between three different Special Clubs within Ashinaka High School:

Once a club is chosen, the partner can then be chosen through a series of decisions in the first part of the game, with the remaining sections of the game building up the relationship level with the partner for a desired ending result.

Add a photo to this gallery 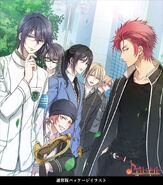 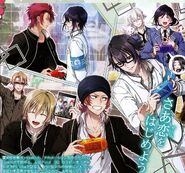 Add a photo to this gallery

Retrieved from "https://k-project.fandom.com/wiki/K_-Wonderful_School_Days-?oldid=32098"
Community content is available under CC-BY-SA unless otherwise noted.