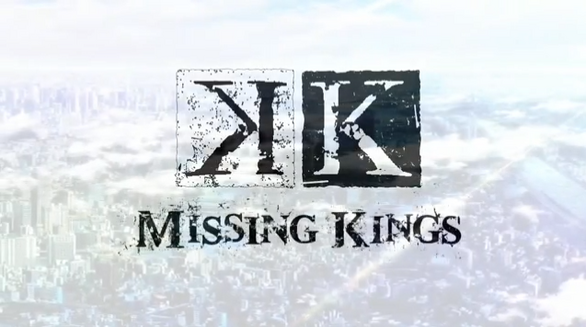 The film had a worldwide premiere on July 5, 2014 at Anime Expo in Los Angeles, Japan Expo in Paris, and also select cinemas in Malaysia, Singapore and Taiwan. In Japan, it premiered on July 12, 2014. In the US and Malaysia, it premeired on July 18, 2014 in selected theaters. It was released on Blu-ray and DVD on April 22, 2015. The English cast was revealed by Viz media on October 7th, 2016, and gained its North American release on March 14th, 2017.

On October 13, about a year after the events of the “Academy Island Incident” between four of the seven Kings, Silver Clansmen Kuroh Yatogami and Neko have been searching for their master, Yashiro Isana. Without finding any clues to his whereabouts, the two became disheartened. However, one day, they see HOMRA members Rikio Kamamoto and Anna Kushina being chased by someone.

Reisi is seen standing on a rooftop gazing at his own Sword of Damocles with a somber expression, and notices that it is starting to rain. Progressively, SCEPTER 4 is dispatched to the territory of the Gold King as another clan invades the residence of the Gold King. A clansman, Yukari Mishakuji is introduced, attacking the clansmen of the Gold King. Yukari standing over what appears to be a slate.

Kuroh and Neko meet with Kukuri Yukizome. They start out casually with Kuroh inquiring how the Academy Island has been since they left, and Kukuri comments that only the tower and the big crater (where the kings fought) remained the same. Kuroh has a brief flashback. It turns out that the whole story occurs almost a year after the death of the Red King and the disappearance of the Silver King. Neko makes a joke: “Shiro, how far could you have been blown away?” Kuroh and Neko split up after Shiro’s disappearance to search for Shiro, but so far they have come up with nothing. Neko suddenly sits up abruptly, cutting off Kuroh’s thoughts and points past Kukuri and Kuroh stating that she saw two members from HOMRA. Kuroh then asks Kukuri to head back to the academy first as he and Neko pursues the HOMRA members. .

The two HOMRA members are Kamamoto Rikio and Anna, being pursued from a member of the green clan, Douhan Hirasaka, that had attacked the Gold King’s tower. Kuroh protects them and states that Anna is under his protection, before the clansman disappears. Kuroh asks why they are being chased by the Green clan, Jungle, and Rikio answers by stating that they want to use Anna to track down the Silver King as he was the only person capable of thwarting their plans. Kuroh and Neko ask Anna if she can locate Shiro or if he is alive, but Anna says that she can’t at that moment, nor did she know if Shiro is alive. Rikio then tells them that since Mikoto’s death, Kusanagi Izumo went away and left Anna to his care, and HOMRA is almost completely disbanded; Anna's powers are also revealed to have been unstable for a long time. Kuroh asks about Misaki Yata, then the scene changes, showing Misaki inside Kusanagi’s bar, watching an old recording of his 18th birthday. Kuroh then suggests that they continue their discussion at their base on the Academy Island.

They encounter Yukari Mishakuji who Kuroh revealed to be Miwa Ichigen’s former clansman. Kuroh asks Rikio and Anna to run as he faces off with Yukari. As Rikio and Anna run away, the masked clansman appears, slashes Rikio from the back, and kidnaps Anna. Kuroh and Neko gives chase while an injured Rikio makes his way back to Kusanagi’s bar. Rikio tells Misaki to get himself together as he informs him of Anna’s kidnapping. Rikio then suggests that Misaki ask for Saruhiko Fushimi’s help since he had access to the Blue Network.

Misaki calls Fushimi, asking him for help to track down Anna’s whereabouts. Fushimi gives him the coordinates of the Gold King’s tower.

Later, while in Munakata's office, the Blue King is listening to Fushimi's report about the infiltration of Mihashira Tower while watching footage from a surveillance camera of a masked intruder walking through walls. He and Fushimi get into a petty struggle about the proper term for the said intruder, which clearly irritates Fushimi; he refers to the intruder as a " ninja ", while Fushimi refers to him as a " masked man ". During their squabble, while Munakata is obviously enjoying himself, Fushimi points out that the person in the video kidnapped Anna Kushina, and whatever is the reason behind it can't possibly be good, making the comical scene in the office turn serious; Munakata announces that he is now aware of the enemy's intention, and decides that it is time to head out to Mihashira Tower, and as both men descend the stairs, he asks Fushimi who had asked him for help. When Fushimi asks if he's obligated to answer, Munakata answers in the negative, stating that he trusts Fushimi's work, and smiles; he clearly suspects who had asked Fushimi for help.

As Kuroh and Neko stands outside of the Gold King’s headquarters, Kuroh tells them that they have to wait and observe for a while, saying that it was more than stupid to invade the Green clan without a plan. Upon saying that, Misaki suddenly ambushes the tower, making Neko comment: “That is stupidity at its best!” So without any other choice, they followed Misaki inside and fought their way through to where Anna was being held captive by the masked clansman and Yukari Mishakuji. While Misaki faces off with the masked clansman, Kuroh faces off with Yukari. At some point, Kusanagi shows up to protect Neko, then Misaki. Asking Misaki to buy him some time by distracting the masked clansman, Kusanagi talks to a caged Anna.

Anna starts having a dream with her eyes open. Upon waking up in a bed, she sees Totsuka Tatara. Tatara notes that her face looks distressed and she tells him that she had a nightmare wherein Tatara dies and Mikoto dies from getting his revenge of his death and that HOMRA slowly became disbanded. She takes her words back almost immediately, saying that she must be in a dream instead, and Tatara confirms it immediately. Mikoto appears and Anna rushes to hug him, calling him an idiot, before realizing that his Red is still warm. The Red King reveals that the Red that Anna is talking about is her own Red, her color before crouching down, and caressing her face gently, revealing how much she means to him, the gesture giving her back her confidence, and mending the wound in her heart.

Anna becomes the new Red King and this is only proven further as the Sword of Damocles of the Red King hangs over the tower in which they are inside. Outside the tower, marks on former HOMRA members appear at the appearance of the new Red King. Yukari and Kuroh take their fight inside. Yukari then states that Kuroh’s sword is empty which then makes Kuroh questions his purpose of wielding a sword. Neko tells him not to lose and questions him if he wishes to see Shiro again. Kuroh then recalls the oath he made of offering himself and his life to the Silver King as his clansman, giving him the answer to his own question. Kuroh and Yukari then fights again, but the fight is interrupted as the Green King, Hisui Nagare, through a vassal of a parrot orders for Yukari to stop since Anna was not an abducted HOMRA member anymore, but the new Red King. Yukari comments that he would not be satisfied until he had beheaded someone, but follows the Green King’s order still, bidding Kuroh goodbye and until they meet again.

The Green King then launches an attack on the group, but Anna manages to hold it off, only to collapse from exhaustion. She then wakes up to find that Reisi Munakata had used his aura to dissolve the attack on her and her rescuers after she collapsed; unseen by them, the Blue King gives a satisfied smile.

The next morning, Munakata and the rest of Scepter 4 await Anna's exit from the tower, and he watches as his men salute her awakening as the new Red King. When Anna goes to meet him, he greets her with a gentle smile, and after she thanks him for saving her and her friends, he tells her that she wouldn't have needed his help if she'd been in her best condition, and acknowledges that the Green King, Nagare Hisui should be watched carefully since he is a very troubling person. After the rest of the Red Clan arrive, and express their relief that Anna is alright, both the Blue and Red Kings agree to leave Mihashira Tower under Scepter 4's surveillance, and that Munakata will be entrusted with full responsibility. Munakata then notices Anna looking at his sword, and removes it, presenting it to her with a saddened expression, and confirms that he'd slain Mikoto Suoh with it. As she touches the sword, both clans become tense, preparing for a possible clash, but it doesn't happen. Anna then tells Munakata that he'd done what Mikoto had wished, so she won't hate him for it, but she doesn't want to thank him for it, either. Munakata smiles, and states that it is how it should be.

The last scene shows Kuroh and Neko with Kukuri back inside the Academy Island. Before they parted, Anna apparently gave Kuroh one of her red marbles as a charm, but the orb actually reflected that Shiro was still alive somewhere. Kuroh and Neko tried to call out through Shiro via the marble, but Shiro could not hear them. The scene focuses to where Shiro is then – on a temple located at the bottom of an airship – with the Gold King who was revealed to be dying. It was revealed that the Gold King has saved the Silver King’s original body from the sea and had it restored to its original form. Shiro then states that he would not run away anymore from the new world/beginning. The Gold King then remarked how it is a waste to close one’s eyes before he slowly succumbed to death.

Later, in the post credits scene, Munakata is standing outside of Mihashira Tower as repairs are being made, and sees a crack appear in his Sword of Damocles, a result of the burden he has to bear from killing Mikoto Suoh, the former Red King. He states that he will accept the challenge before turning to go inside the said tower with Seri Awashima and Saruhiko Fushimi following.

Retrieved from "https://k-project.fandom.com/wiki/K:_Missing_Kings?oldid=31975"
Community content is available under CC-BY-SA unless otherwise noted.